When I woke up that morning before 7, there was already a message on my phone machine.  I had unplugged it because, as I liked to say jokingly, “No emergency is so dire that it can’t wait until I’ve had eight hours of sleep.”  It seemed like the most reasonable philosophy.

My father Donald Groves in his twenties

“Your father has been admitted to the hospital,” my mother’s message said.

I hadn’t counted on that kind of emergency.  I cancelled everything on my schedule and drove across town to the Kaiser Hospital in Bellflower.  While I drove, I focused on what would be best for my father: a cheerful, optimistic attitude.  Whatever the prognosis, it was best to present a face that said, “This is nothing.  You will get better,” but without coming right out and saying that.  I was wearing my black long-sleeved shirt in which I felt like a real man, a Clint Eastwood man, even, a guy who could roll up his sleeves and show everyone his muscled forearms.  I was 33, after all.  I was a man.

And when I stepped up to his bed in ICU, with my mother standing next to him, holding his hand, I tried.  But the moment I saw him, it hit me out of left field, from somewhere deep in childhood, perhaps, or deep in my child’s heart, or maybe deep in my forest of fears, I don’t know, from somewhere it hit me, and on a dime, my face turned from a smiling shield to a crying mess.

My father had spent the past 20 years getting more bitter and more distant from us, and as a result, I had become increasingly unable to speak to him.  But still, when it came down to it, I loved him from a place deep down.  In sickness, he became a bit more real to me.  He was vulnerable.  In fact, being in a hospital gown with tubes down your throat is about the very definition of vulnerable, with doctors pronouncing your fate and depending on straight-faced nurses for nearly every biological function.  I remember the look on his face, like, What’s going to happen to me?

My father in his fifties, when he was increasingly sick with lung disease.

I had given him that cold.  A couple weeks before, I had visited him, my nose running and feeling lethargic, and predictably, he came down with it, too.  But there was a difference between us: I wasn’t hiding advanced lung disease from everyone around me.  That cold, combined with his silent killer, felled my father in March, 1989.  All that anyone could say was that he was gone too young, that he had a lot of living left to do.

He died the month he made the last mortgage payment on his house.

In the years since, my father has become a memory more than a person.  I wonder if he really was the person I remembered, or whether my memory had distorted it.  Or perhaps the person I was at the time had distorted it.  As an adult, I had become increasingly unable to connect with him, because being positive and hopeful wasn’t something we had together.  He had become someone who expected the worst, thought everything was stacked against you.

My father’s politics were pessimistic, too.  Politicians were all corrupt, so just don’t give them any money to steal.  Starve government.  Cut taxes to the bone.  Rapid transit is a scam.  He bought all that self-serving Republican crap.

“I don’t know what they’re talking about when they say we’re overpopulated,” he said.  “When I fly to jobs, most of the time I look down and it’s just empty land.”

As I lived my life, I chose a different path.  I followed that positivity thread as far as it could take me.  In fact, it became what I had instead of religion.  As a freelance journalist, I believed in a better world.  I believed in progress.  Later, when I became a professional magician, I ignored hecklers, never struck back at them.  Always, I try to surround myself with only good people, so that I can feel comfortable giving, knowing that I will always get things back from them.

But as the years marched on and I got further and further from my father’s death, I began to wonder one thing.  Will I outlive my father?  In some weird way, it seemed like I might die on the day that I turned the age he was when he died.  It wasn’t a rational thought, to be sure–it was wacky, even–but it was a thought that occurred to me, nonetheless.  Die on the day.  We are each allotted a certain number of years, and it just seems fair that you shouldn’t–be allotted more years than your father.

Basically, we just paid more attention to Mom.  I was visiting her once a week and called her every other day.  Then I increased it to every day.  Then to twice a day.

But How are you isn’t really sufficient, because she would always say Fine.  You had to dig.  You had to spend time with her.  Sometimes, after four hours in her house, she would break down and start crying.

I missed him, too, but in a different way.  I wondered what he would have said to me.  I wanted to hear about his Korean War service, because he had never talked about that.  I wanted to hear about what he saw, the friends he’d lost, the gooks he’d killed, and how badly he felt about that.  I wondered about his mentally ill mother, because he had never talked about her, either.  Plus, I just wanted to sit with him.  Watch bowl games with him.  Watch him play with his dog.  Go to a coffee shop and have eggs and bacon and hash browns with him.  An oily, unhealthy breakfast with lots of ketchup.  He really liked that.

In 2012, I began calculating the months and days until I turned his age when he died.  His death day.  Turned out it was August 9, 2015.  I wondered what I would do on that death day.  Wait for a lightning bolt to kill me?

A month before, I called my mother and told her all about my feelings about August 9.  I asked her to be with me on that day.

“Why is that date important to you?” she asked.

“I don’t know.  But will you go out to the gravesite with me?” I said.

So when the day approached, I cleared the calendar.  That morning, I woke up with a purpose.  I drove to my mother’s house and gave her a big hug.  Then we went out and bought some flowers.  We drove to Forest Lawn in West Covina, which is all rolling hills and grass as far as you can see.  I helped my mother up the stairs.  We stood above my father’s gravestone and thought about him.

My father coaching my Little League baseball team when I was 12, with my sister and her friend behind him and me in the background.

He was the man who taught me how to be good.  My mother was the strategic one, the one who was always figuring out how to get ahead, but my father was the one who didn’t have any angles on anything, he just worked hard and loved us.  He turned down promotions so that he could spend more time with his family.  In his fifties, he would always sit slightly outside of the circle of the family and watch quietly.  It was his angle, outside looking in, as if he were saying to himself, I want to remember this moment forever.

He was the man who was the smartest, the wisest, the best.  He never gave me worldly advice, like, To thine own self be true or Neither a borrower nor a lender be.  His wisdom was more everyday.  Like when I hit adolescence and began developing the upper-body physique of a mesomorph.

“Don’t worry,” he said, “you’re not going to grow breasts.  That’s what I thought when I was your age, but don’t worry about it.”

Or when I got angry at somebody at school, he would say:

“Remember, you can attract more bees with honey than you can with vinegar.”

That was his wisdom: breasts and vinegar.

In many ways, he was me. 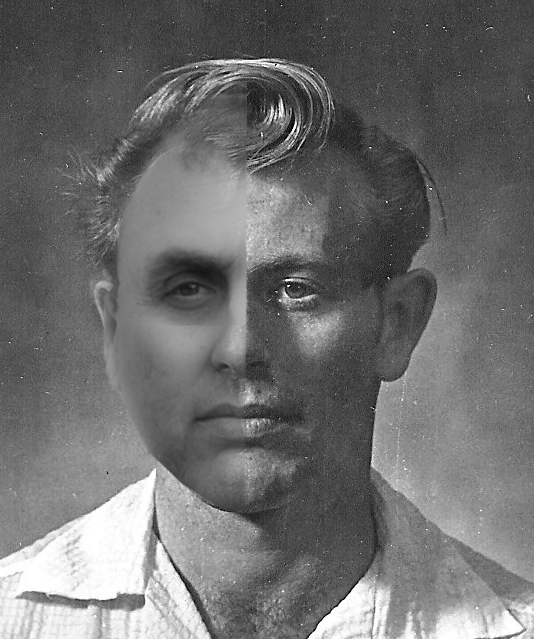 There was a time, before I arrived, when my parents’ marriage was shaky.  He was thinking about moving out of the house and divorcing her.  There may have been another woman involved, I’m not sure.  But then, Mom told him that she was pregnant.  He moved back in and made the marriage work.  He wasn’t going to desert his child.  That’s the kind of man he was.  He wasn’t going to leave a child without a father. 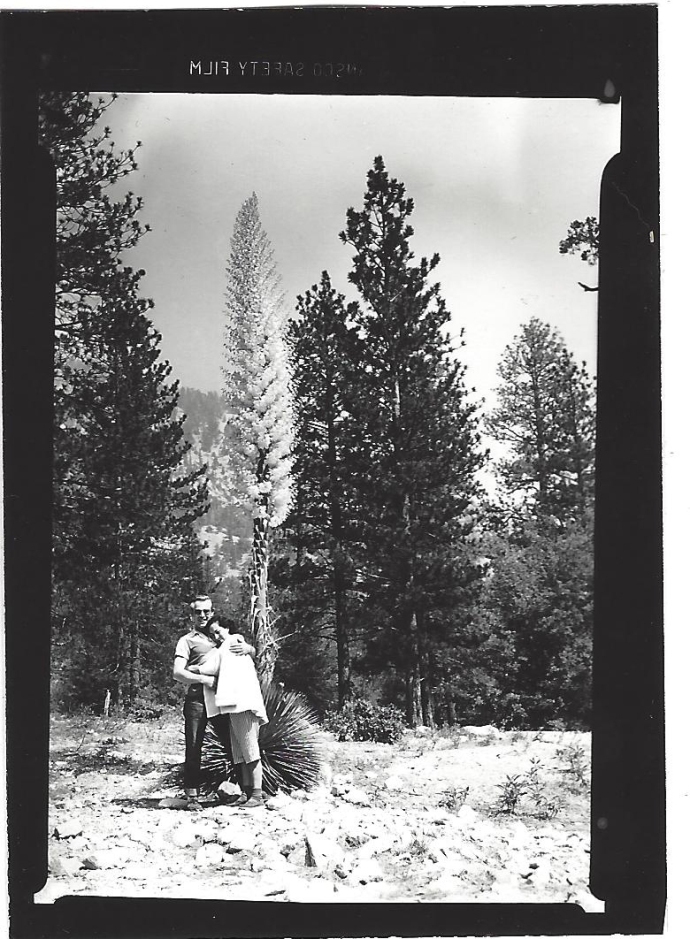 On that day at the cemetery, we placed flowers at my father’s grave.  We lingered and talked about him.  We meditated on his life.

Once, I asked my father what he wanted for Christmas, but his tastes were spartan.  He asked so little from life.

“No, I’m going to get you something, so tell me what to get you.”

“Dad, I’m going to get you something.”

So I asked my mother, and we came up with something: He loved macadamia nuts.  It was his only luxury, it seemed.  I had made a fair amount of money that year, so I splurged and bought him four bottles of macadamias.

Even though he complained, though, I was happy.  He deserved it.  I loved him four bottles’ worth of macadamias.

I was thinking about this during our visit to his grave.  Afterwards, we left and sat in the car.

“You want to go out for lunch?” my mother asked.

We went to Carrow’s.  I’m not a fan of the place, but this was Dad’s day.  He was a cheap bastard and would have liked us eating at a restaurant whose food is unremarkable but whose bill makes you happy.  He would have smiled.

3 thoughts on “On Reaching My Dad’s Age”