The hammer came down on my mother tonight.

It was Christmas Eve, and as usual, I was performing as Santa Claus.  It’s a gig I started years ago as a young man, and I still enjoy it.  All you need to do as Santa Claus is love.  I had a gig in Granada Hills at 5 pm, and another in Santa Clarita at 7 pm.  Because of that, I was unable to drive my mother to our extended family’s New Year’s Eve party.

My mother knows she shouldn’t drive at night.  She’s had two strokes, one of which gave her a small blind spot between 11 and 12:00.  In addition, her night vision has gotten worse to the point that the streetlights look like Fourth of July sparklers.  But my mother is proud and doesn’t like to ask for help.  She likes to be independent.  She’s fierce, as you know from previous posts.  And she doesn’t like to relinquish control to anyone, and I mean anyone.

At the Santa Claus gigs, I entertained little kids with my elf Clairabelle at my side.  I’ve known eight-year-old Annie since she was born, and I was thrilled that she hasn’t yet reached the disbelieving threshold.  The autistic kid in the house, 19-year-old Damian, still believes in me.  He sits next to Santa Claus, hangs his head, and croaks out his Christmas wishes.  He now works at Lamppost Pizza.  Some autistic kids are geniuses at one thing or another, but not Damian.  He’s just a regular adult who believes in Santa Claus.

At 6:45, we jumped onto the 5 freeway and sped up to the Calgrove turnoff.  When I entered the second home, I was interested to see how 8-year-old Melissa was adjusting.  Her father died two years ago, and everyone has been worrying about her.  I was glad to see that she seemed just fine, dressed in her lovely lacy black dress and shiny patent-leather shoes, but I was especially pleased with her radiant smile.  There are wounds that aren’t evident, I’m sure, but I’m confident that she’ll survive.

After that, we jumped on the road and sped back to the family party.  It was after 9 pm when we walked in.  Immediately, we could sense that something had happened.  Gradually, I got the story. 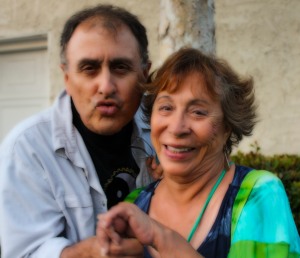 My mother had been driving to the party in the dark when another motorist saw her weaving.  They called the cops to report an erratic driver.  What was strange was that just a half-hour earlier, we had called 911 and reported an erratic driver on the 210 freeway approaching Pasadena.  Within seconds, a cop was on my mother’s tail.  The lights went on and she pulled over.

“You seem to be driving erratically,” the cop said.

My mother never drinks.  It interferes with her medication. My mother was impeccably dressed, tastefully coiffed, and didn’t have any liquor in her voice or in her eyes.  Later, she told me that “his face was so close to mine that I thought he might kiss me.”  Obviously, he’d been smelling her breath for a $10,000 probable cause windfall.

“I saw that you were looking down at your GPS device,” he said.

Mom explained that yes, it was a new GPS device, but the main problem was that she had simply mistaken one line on the road for another, ending up in the center lane, the one you’re not supposed to drive in.

“It’s dark around here,” she said.

“Do you have a license?”

She handed over her license and he checked it.  Everything came up just fine, but there was still the question of the erratic driving.  At 83, there’s always a question of whether her keys should be taken away, and with it, her independence, her self-respect, and her autonomy.

“I’ll be honest with you, officer,” my mother said.  “I know I shouldn’t be driving at night.  But it’s Christmas Eve and my son is working.  He gets hired out to play Santa Claus at people’s homes on Christmas Eve.  So I thought I could drive myself, but…I don’t know…it’s so dark on this street….”

The cop had a decision to make.  He could give Santa Claus’s mother a ticket for erratic driving and ruin her season.  She would have to get retested at the DMV and jump through hoops.  Or he could…what else could he do?  He had to be responsible to the other drivers whom my mother might slam her car into.

“Where are you headed?” the cop asked.

“A family party,” my mother said, and she gave the address.

So my mother followed the police car to the party, which was only two miles away.  When she had parked, he jumped out of his patrol car and held the door open for her.

“Can I carry something?”

So he carried the deviled eggs and followed behind her as she walked up to my cousin Gary’s door.

For the people at the party, I heard later, it was an arresting sight.  The doorbell rang, and in the doorway appeared my mother with “this big hunky cop behind her,” according to my cousin Chrissy.  “I thought, ‘Oh God, Sally’s done it again.  She’s dating some really gorgeous cop now.'”

Gary invited the cop inside, but he demurred.

“You can have something to eat,” Gary said.  “We have tamales, menudo, the works.”

The cop turned it all down.  Instead, he asked to speak to my sister.  He was just going to talk it over with the family and start a conversation.  Make sure they’re aware that her failing eyesight might be a problem.  He wasn’t going to let it drop.  It was the responsible and kind thing to do.  And when it was over, when his job was finally done, he quietly left, knowing that he had gone out of his way to do the right thing.

When I arrived at 9:15 pm, my mother was sitting on the stairs looking chastened.

“Can you drive me home?” she said sheepishly.

“I’ve got quite a story to tell you.”